Teambuilding on the mountain

For a Canadian company involved in the automotive industry, we have designed a very special adventurous day with a map and a compass in the beautiful Gaistal near Leutasch..

In the early morning the participants of the Interalpen-Hotel Tyrol were welcomed by our team and divided into small teams. After a small introduction to reading the maps with a compass and a road book as well as first test attempts, the bus journey started to the starting point of the Team Trophy.

Each team had a different route to their destination, so everyone had enough time to go through the various tricky stations. The task of each team was to find the next station in the shortest possible time with their equipment and to solve the challenge with the highest possible number of points. On the way to the final destination the participants found treasures, made funny team photos, built a Leonardo bridge and passed the test of courage with the Flying Fox. In addition, archery could be tried and the first-aid know-how to be improved.

The joy was great, as all teams had found the final destination at the Hämmermosalm and were rewarded with a 3-course menu. As a souvenir, the company's logo was made with natural materials and wooden edelweiss and the photographer took a team photo. After this exciting adventure, the teams were still talking about the challenges they have mastered during the Team Trophy on the hike to the bus. 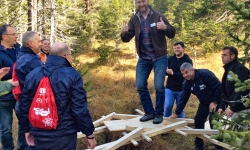 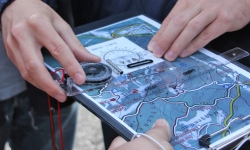 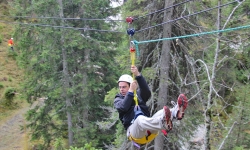 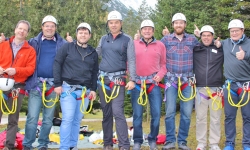 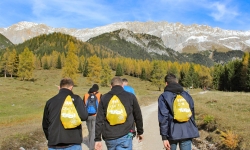